By Jeff Toquinto on October 09, 2021 from ToquiNotes

It was back in August when Simpson Elementary Principal Jill Steele had her chance to speak in front of the Harrison County Board of Education to talk about facility and safety needs at her school. She was not alone.
Principals from across Harrison County gathered at the meeting. Some of the requests were massive and several, like one of Steele’s, did not come with what she believed was a huge price tag. 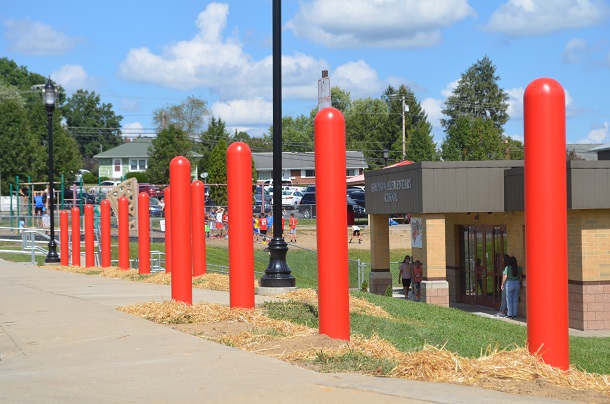 However, the price was not an issue. There were so many priorities that – despite her certainty the need was critical – she also knew the reality of the requests before the Board.
“There is only so much many so we figured we would be down on the list,” said Steele.
Yours truly actually saw the request in more than one media outlet. Due to the nature of the other requests, it was relegated to a sentence and a quick sound bite.
Jill Steele was concerned, and was hearing it from her staff, about the safety of students outside of the building and some of the buildings themselves. The reason for that stemmed from the possibility of an out-of-control vehicle running over the curb and into one of Simpson Elementary’s buildings or the playground and commons area where children gather frequently.
From there, I decided to give it a look. Although it has not happened, the possibility of it happening was very real. The solution may have been simple, but getting funding is always a problem for any cash-strapped school board.
After talking to Steele, the story ran thanks to our ability to micro focus on Bridgeport schools when needed. Less than three weeks later, the issue has been addressed.
“It was as easy an experience as I’ve dealt with here, probably the easiest,” said Steele. 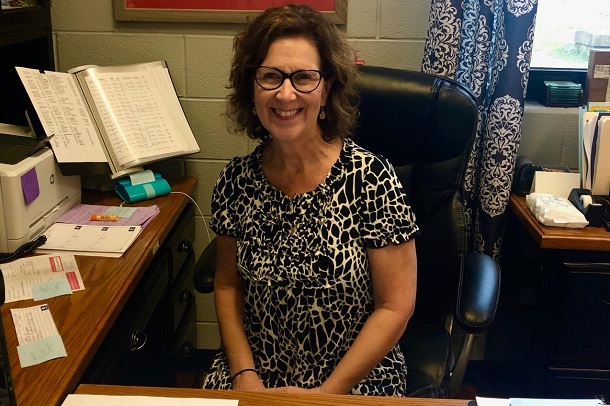 So, what happened? Why is this particular safety issue no longer an issue?
For starters, the City of Bridgeport has Home Rule. It is a statewide program Bridgeport is still a part of that allows cities to enact rules or laws that are not allowed by the state if the Home Rule Board agrees to it. The city asked to be allowed to provide funds to their local schools – not allowed by the state – as it found necessary.
Second, City Engineer Beth Fox and Mayor Andy Lang became aware of the situation. From there, it quickly fell into place.
“The concerns the school had for that particular issue, we learned about it on Connect-Bridgeport,” said Fox. “From there, the mayor and I got together to get ahold of Jill to see how we could assist and implement something by teaming up with the county.”
Steele remembers the call. She is glad it came.
“(Beth) was curious as to why we didn’t contact the city and I told her I didn’t realize we could go that route,” said Steele.
The route was open. And open immediately.
“I’m pretty sure it was the same day she sent people from her engineering department out to take a look. We met, looked at it, talked about it, and said it would be done,” said Steele. “I was amazed in the most positive way.
Fox said it was an easy decision to make. And with Home Rule allowing it and already utilized, this was the right thing to do.
“This was a safety issue, much like the work we did with the county on the sidewalk in front of Johnson Elementary,” said Fox. “We 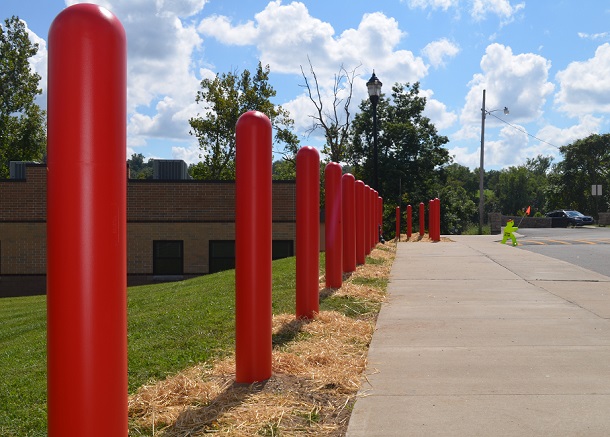 performed the work there and the Board provided the materials, which is like this. It works.
“Any time we can upgrade a safety situation for kids, pedestrians, bicyclists, we’ll do what we can to assist a project to get it done,” said Fox. “I have a child there and it makes me feel good knowing the staff knew it was an issue and are paying attention.”
The project ended up being complete just after school was open. Steele said the time frame was pushed back a bit due to delays with materials, but not it is complete.
What was done was exactly what Steele and Harrison County Schools Safety and Discipline Director Ken Winkie had discussed. Bollards were installed in front of the school, which now provide a relatively safe barrier for any vehicle potentially out of control.
“An added bonus is the bollards match everything. You do notice them, but it’s not a bad thing because we feel we are now a safer building with adequate protection,” said Steele. “I’m amazed and thrilled. I could not be happier, but I am not surprised once I learned this was possible through the city.
“This is what Bridgeport is as a community and the city lived up to that because they saw a need and addressed it because it made everyone safer,” she continued. “Our city sees our schools as an important part of the community and some communities across the state, I believe, don’t’ have that same investment.”
As for the investment, Fox said it will likely be less than $5,000 and she said the anticipation is the cost will be split. There are no current projects in the works with the school, but Fox said it does not mean more could take place.
“This was a small price to help protect children,” said Fox. “From a staff standpoint, we absolutely want to see the use of Home Rule in this manner and working with the Board continue. This is the type of project I feel comfortable that puts Bridgeport in the spotlight.”
Indeed, it does. It is a safety project that eliminated the possibility that would have put the city in another type of spotlight that nobody would want.
Editor's Note: Top photo shows the school's safety patrols giving the City of Bridgeport a thank you, while the second and bottom photo show the new safety features in place. Third photo shows Principal Jill Steele.