Editor's Note: This blog initially appeared in Feburary of 2017. Judget Thomas Bedell is now in his 28th year of service
Thomas Bedell has a “dirty” little secret he’s known about for all 25 years he’s been a Harrison County Circuit judge. Here’s the thing – the judge doesn’t mind divulging his secret.
The reason for that is that the secret pre-dates his arrival on the bench on Jan. 1 1992, which means he’s just begun his 25th year as an elected official. Not only does the secret pre-date Bedell’s arrival as a Harrison County judge, it pre-dates his arrival on the Earth. 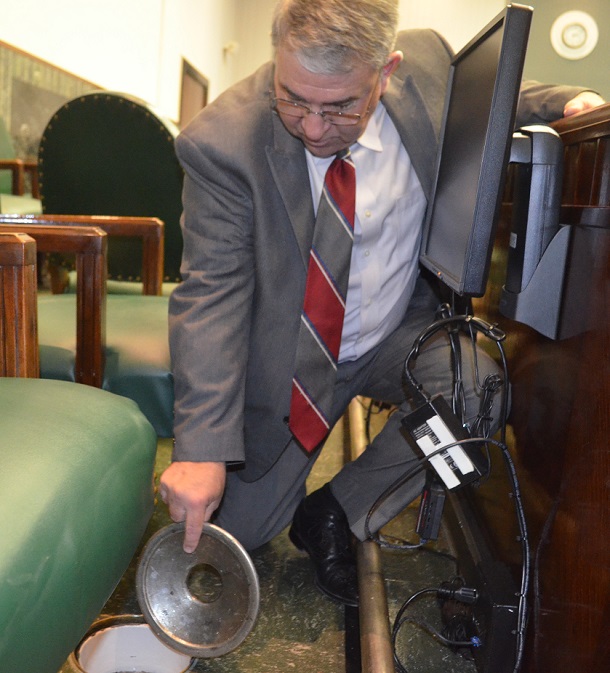 The “dirty” little secret that’s been in plain view of thousands of people for decades has been in place since 1932. That would be the year (Nov. 28 – a Monday to be exact) that the current Harrison County Courthouse opened its doors to serve the public following dedication ceremonies.
The secret is inside Bedell’s criminal court room. Bedell said it’s also in the confines of Judge Christopher McCarthy’s courtroom as well.
For anyone that’s served as a juror, there’s a chance they’ve noticed it in recent years. To most, it looks like not much more than a hole in the ground; a place that has become a min-garbage can by every chair in the jury box for those serving.
The holes in question were actually built into the floor during the construction of the facility in 1932. The holes are flush with the floor and are surrounded by a stainless steel lid. If you remove the lid, there’s a porcelain pot inside.
It’s the pot that is the “dirty” part of the secret. Although no longer used as originally intended, those holes in the ground that lead to the porcelain pots are 1930s’ era spittoons
That’s correct. Inside the Harrison County Courthouse, jurors at one time had the option of unloading their spit from whatever brand of 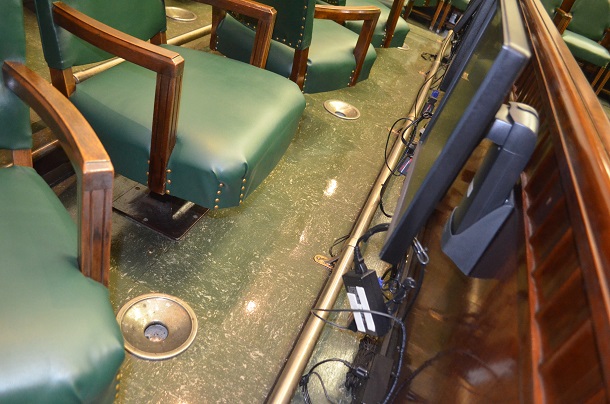 chew, snuff (or maybe just a cold-old fashioned head cold) they had in their mouth into their own little spit collection area.
“The pot is where the spittle would have gone into,” said Bedell. “In my time here, thank goodness, I’ve never seen anyone try to spit into them.”
That doesn’t mean they’re not still performing a function. Bedell said they still serve as a collection bin.
“The jurors do use them, but they use them to throw away their hard candy wrappers and gum wrappers.  Usually, over a period ranging from six months to a year they fill up,” said Bedell. “Obviously, that’s not something our diligent maintenance staff has on their radar so after a time period I empty my spittoons. I believe I can lay claim as the only trial court judge in the nation that cleans out his own spittoons.”
Some may wonder why Bedell doesn’t get rid of them. Certainly, a person in his position could make the request and likely get that granted. However, he sees it for the historical value it brings to the building that is only 15 years away from being a century old.
“My initial reaction was to chuckle when I saw them; I actually thought it was obvious as to what they were. What I liked is that it shows how society has changed since 1932 when the building opened,” he said. “You have the spittoons on the ground and computer screens in front of the jurors. There’s a clear message, and a unique one, of the technological progress we’ve made.” 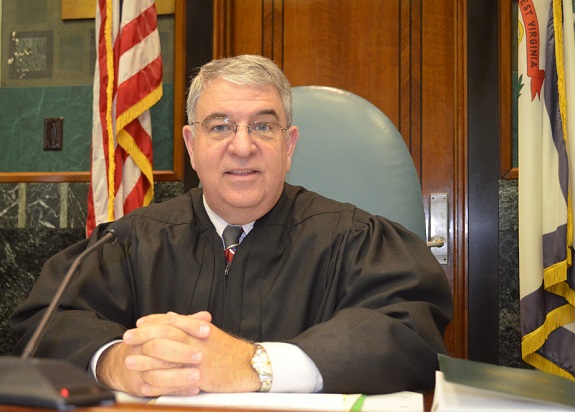 Prior to Bedell’s first year, back in 1991, there was a major renovation of the court rooms with new draperies, wall paper and other items that made the imperial green marble and walnut wood pop in the courtroom with the two-story ceilings.
Bedell said the changes were definitely considered aesthetically pleasing by himself and others that were there at the time. And when he arrived there was talk to do more.
“The thought was if  the rest of the room looked so good they could spruce  things up with new flooring and get rid of the original rubber tile flooring that came with the building; perhaps put down carpet,” said Bedell. “I told them there were certain areas, like the attorney’s area, that they could change, but if they messed with the spittoons they would have to deal with me.”
Bedell’s decision eventually meant no carpeting. Everyone, he said, decided that the original work was still good and to date there hasn’t been any grievances filed by any lawyers or jurors for being subjected to having to sit near or be in a room with the once dirty spittoons.
“I’ll be opposed to getting rid of them as long as I’m here. That was considered a state-of-the-art feature to this building in 1932,” said Bedell. “The good news is that the (Harrison) County Commission has been diligent in protecting the history of this building to show of its beauty and unique features. The spittoons are certainly unique.”
Bedell said there’s definitely historical value with them. As for a monetary value, however, he said he doesn’t believe that’s the case. There’s also an educational value.
“When I have classrooms of kids coming in from the elementary schools and even the upper grade levels, I normally bring them over to the jury box and ask them if they know what those are in the ground. The little kids have no idea what they are, but occasionally a (middle school) or high school student will figure it out,” said Bedell. “Whether they figure it out or if I end up telling them, they then get a quick lecture on the evils of tobacco.”
The secret may have a “dirty” history, but Bedell’s using it to help keep kids clean from tobacco. That’s more than enough reason to keep them around – maybe for another 85 years.
Editor's Note: Top photo shows Judge Thomas Bedell pulling open one of the vintage spittoons, while the second photo shows how they're situated with the computers in the same jury box built 85 years ago. Bottom photo is Bedell at his bench.