ToquiNotes: Looking Back to Only Time in 46 Years of Business the Doors to The Canteen were Closed

By Jeff Toquinto on September 12, 2020 from ToquiNotes

When I make an often daily trip down Milford Street in Clarksburg, I drive by the former site of the Canteen. You remember that place, right?
All of my memories are fond ones. A few weeks ago, during a heavy storm, my mind wandered back to a time in the 1980s when the Canteen did one thing it never did.
The memories go back  to the middle part of November of 1985. As many of you know from my generation or older, North Central West Virginia and most of the state was leveled by a flood.
I was a senior in high school that year and can still remember Principal Wilson Currey going over the loudspeaker to announce there 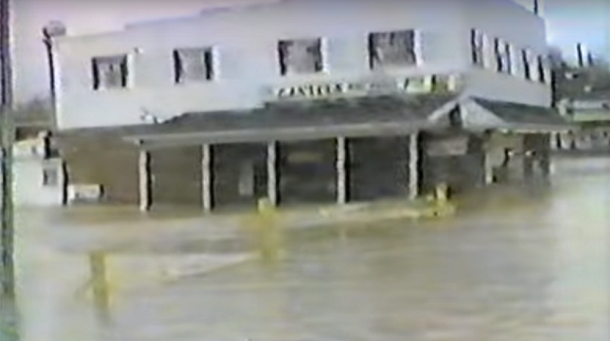 would be an early dismissal. As one might imagine, there was a lot of excitement as rumors spread that there was the possibility of real serious flooding that could keep us out of school for days.
This was the pre-internet, cell phone era and minus the Doppler radar and the 24-hour weather channels. The excitement, as misplaced as it was, was a juvenile reaction to what ended up being a terrible situation that impacted thousands of West Virginians. In fact, 29 counties – including Harrison County – were listed as federal disaster areas by President Ronald Reagan.
What’s amazing to me whenever I think back, is that I can easily recall in my mind when I realized that the flood wasn’t just a bit of an issue. There was a definitive point in time when word spread of something that let you knew this was long term. 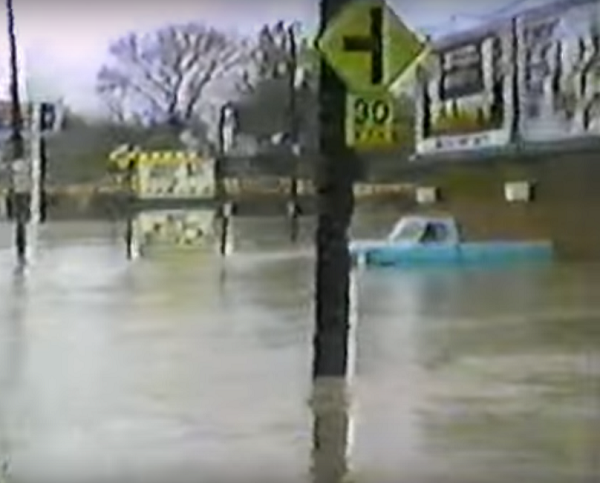 Rumor was that The Canteen on Milford Street in Clarksburg had closed. Sure enough, a phone call on the old rotary phone confirmed those suspicions as no one answered. Later, as a few of my high school friends and I braved the weather to see what was going on, it was clear that the Canteen -  owned and operated by Bridgeport’s Ray Blake – was closed.
Understand that a business closing for foul weather or unique circumstances is not unusual. The Canteen being closed for any situation, however, was unusual – extremely unusual.
In the 46 years that Ray Blake operated The Canteen, the only time it ever was closed or the lights were off – minus a power outage – was during the flood of 1985.
“We always said we never closed and that flood was the only time we did. I’m pretty sure it would have been a problem had we stayed 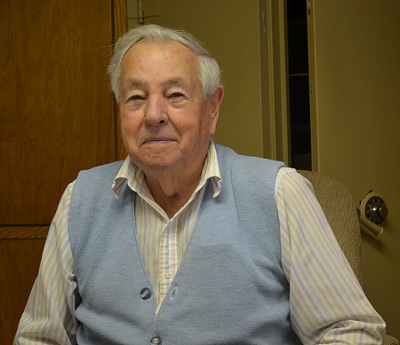 open,” said Blake, during an interview several years ago when he was already in his 90s at the time, with a chuckle.
By the mid-1980s, the Canteen had long established itself as a community icon. The waitresses, the drive through, the delivery service, the 24/7 never close concept and the menu was all lights years ahead of the competition. So when the Canteen was down and out, you knew something was terribly wrong.
“We were watching the water rise and hoping that it would go down,” said Blake. “It didn’t.”
The Canteen on Milford Street is near the West Fork River. Blake said the water from the river was never rushing through the Canteen, but that the “backwaters” from the rising flow didn’t just dampen the building.
“When the water was at its highest, it was touching the bottom side, the underneath side of the table,” said Blake. “What was amazing was that if there was a salt and pepper shaker on the table it didn’t get wet. The water was just below that level.”
How did Blake know this?
“I would crawl in and out of the drive through window. That was the only way you could get in,” he said.
Eventually, after several days and what I believe was reportedly 20 inches of rain during that lengthy time frame, the rain stopped. Then, the waters returned.
“Once the water went down, we went in. We had sat a bunch of stuff up on counters that needed to be saved and because the water 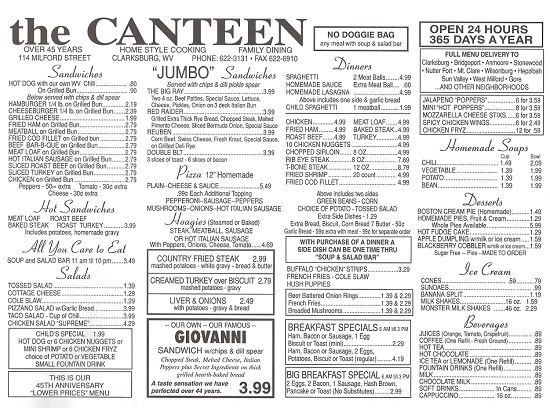 stopped where it did we ended up saving a lot of stuff,” said Blake. “ … There was a lot of damage, but as bad as it was we were able to get back into business pretty fast once everything was down.”
Blake couldn’t remember how long the doors remained closed after the weather – and the West Fork River – returned to normal. He just knows they were among the first to get their doors back open.
“When we went in, the water that was in there was muddy, but it wasn’t thick mud. We were able to clean and replace things fairly quickly,” said Blake. “It was maybe six days, maybe a week after the waters went back down that we were open.”
Blake, a long-time and still ongoing businessman and developer, didn’t just want to open to make some money. He knew, at that time, that the Canteen was more than just a standard stopping point for people who were choosing a place to eat breakfast, lunch or dinner.
“The big relief when it opened was that we could serve people we saw regularly again. We knew we had customers that depended on us for meals,” said Blake.
From that point forward, until a Monday morning in 1999, the Canteen would never close again. In 1999, Blake couldn’t find the quality workers he wanted anymore and decided that issue and needing more time devoted to his business interests in Bridgeport would lead to the end of a restaurant that was beloved by an entire community and even beyond.
“That was certainly a sad day. It was time and I’m glad it created a lot of memories. The flood is one of the few bad memories that comes to mind when I think about the Canteen,” said Blake.
Editor's Note: Top photos are screen shots from YouTube. The video is from Elbeako1 and can be found by clicking HERE. Ray Blake is shown in the third photo and the menu that thousands ordered from is shown below.