ToquiNotes: Recalling the Amazing Life of Ed Morrison and a Legacy Featuring Beauty of Creating Smiles

By Jeff Toquinto on August 01, 2020 from ToquiNotes

It was not too long ago, in fact, just last month, the world around Ed Morrison seemed normal. Although I had not seen Ed since prior to the start of the pandemic, I was following his regular posts on social media as he frequently would show up on my timeline.
Often, others would talk about Ed on their timelines, particularly his neighbors at Maple Lake. You see, Ed had taken his celebrity status in the community to another level by hosting “Driveway Parties” and adding to a long list of fitting titles as “The Driveway DJ.” 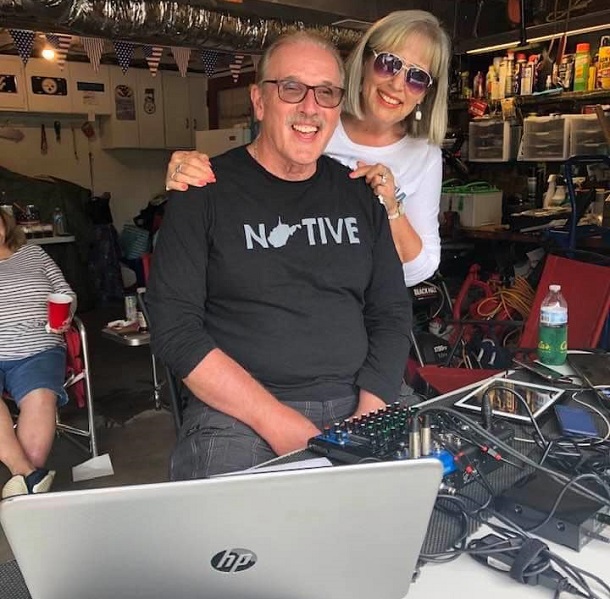 Folks at Maple Lake could sit on their decks, walk by, jog or bike by, and listen to a free evening of music. Even in a pandemic, Ed Morrison was doing the one thing he never failed at – he was making people happy, he was making people smile.
I bring all of this up, as most of you know, because Ed Morrison passed this week, on Sunday, July 26 to be exact. Way too young, way too fast, way too many smiles left to put on everyone’s faces.
He primarily did that with his music – and we will talk more about that. But to leave it at just his music would not paint an entirely accurate picture of just how good of a man Ed Morrison was. He was a father, husband, brother, friend, uncle, animal lover, volunteer firefighter, veteran, business owner and so much more.
I am not sure how I met Ed. I do know this. We talked a lot when we saw one another. And we talked a lot about sports. 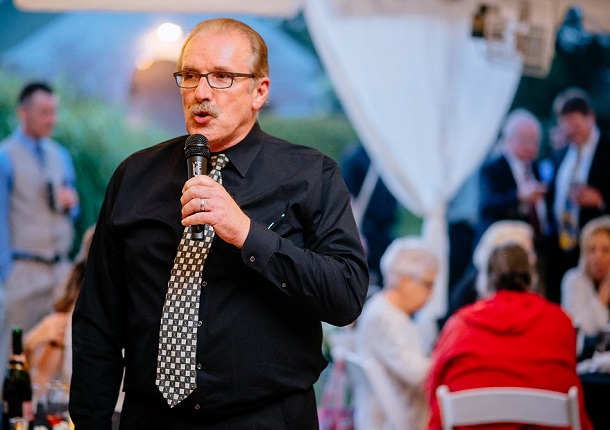 In fact, I enjoyed my conversations so much I looked forward to the oil changes at his Quick Slick business on Barnett Run Road. If he were in, I would pull the car up, put the window down, and talk. Sports was the general topic, but often it would stray elsewhere.
I am sure Ed was like this to thousands who came through those doors at his Bridgeport location or the one in Buckhannon. If I were waiting to get into to get my oil changed, Ed was busy carrying on another five-star conversation with the person in front of me; sometimes conversations going full steam to the cars in both sides of the business.
There was just something about Ed Morrison that put you completely at ease around him – probably just that subconscious part of you 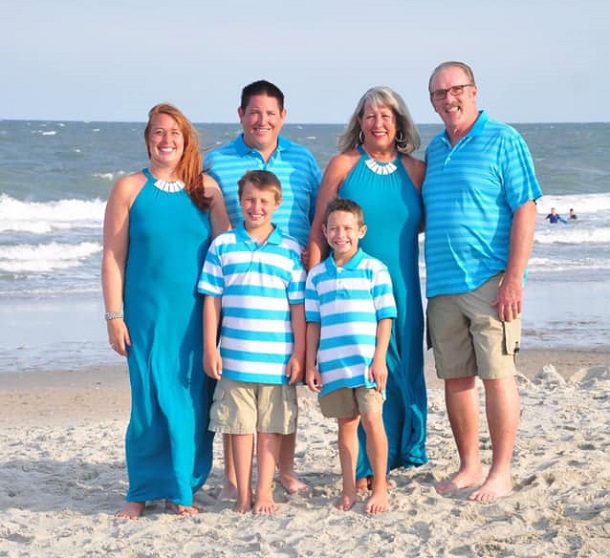 that feels things without you even knowing it.  You knew with Ed you were dealing with one of the good guys.
Stewart Hurd knew about Ed Morrison. Outside Ed’s own family and wife Carol, few probably knew him better.
They have been friends for roughly three decades. They met in what today is Village Square in Clarksburg where both were deejays, and both ended up forming a lifelong friendship from a business that fitted Ed perfectly – one that saw him at work in an always joyous occasion.
“Ed and I knew the weddings were times for people to enjoy family and honor the bride and groom if that was the event we were at. It wasn’t about the deejays. We were there to help everyone have fun,” said Hurd. “Ed was fantastic at that because he loved seeing people happy. Ed was always about making everyone happy because it made him happy.”
Happiness is a central theme when talking about the life of Ed Morrison. To break down all the components of it in a matter befitting all his accomplishments would be an effort in futility. It cannot be done, although the obituary that can be found HERE is certainly a wonderful tribute. 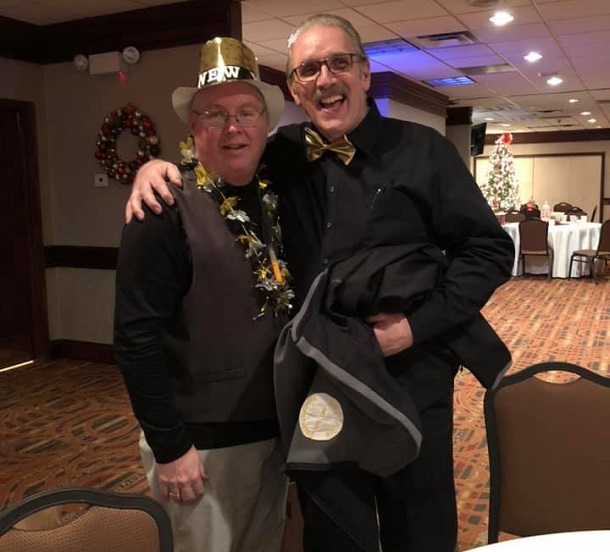 If you have not read Ed’s obituary, please do. I thought I knew him well enough. I did not know half the things Ed Morrison did during his journey on this planet. Stewart Hurd, however, knew that his friend was good on levels a lot of people did not even know about with a list of accomplishments a mile long, many that can be found in the obituary linked above.
“Ed was always proud of anything he did, but he wasn’t impressed by anything he did. That never flipped his switch because he didn’t need gratification by someone telling him he did great things,” said Hurd. “What he did in his life he would never consider a big deal. He would just consider it part of his experience, and it was a good experience.”
The experience involved a whole lot of smiling. Hurd said it was a trademark.
“He was smiling all the time. If you see photos of him, his wife and son and daughter their teeth just glow; they radiate,” said Hurd. “He smiled when he was happy, and he smiled all the time around his family and his grandkids who were the apple of his eye. Ed smiled a lot 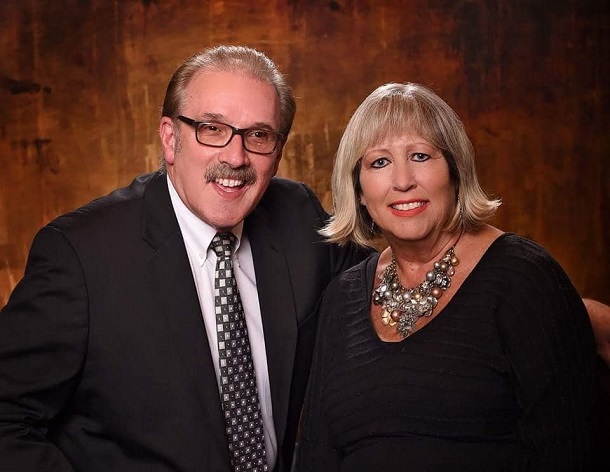 because Ed was a happy person.”
The smile trademark is a common fixture when talking about Ed Morrison. He brought out those smiles out when deejaying by himself or in tandem with Hurd at weddings or New Year’s Shows or any special occasion. He did it at family events. He did it at work where customers were glad to see him and disappointed when he was not there. Ed Morrison brought out smiles … well, he did it everywhere.
It is part of the reason losing Ed is difficult to take. In a world that has lost its way in so many ways, Ed was always on the right path.
“I lost a friend and everyone else lost someone they could count on. When I got the news he passed, it buckled my knees because it was so fast, so unexpected,” said Hurd. “Honest to God, I can’t think of a single soul to ever say a bad word about Ed Morrison
“He just never involved himself in anything controversial because he didn’t care for conflict. Opinions? Sure, he had them,” Hurd continued. “The thing with Ed, he never let an opinion that wasn’t the same as him change how he felt about his friends. Ed was always 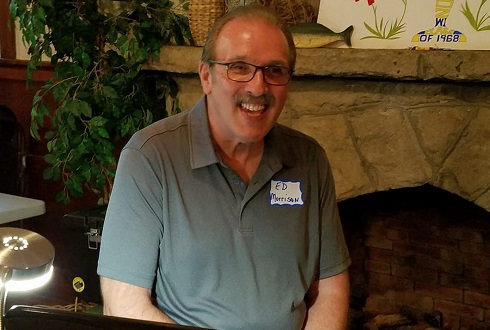 about looking at the good side of things. He was always wanting to make people happy.”
That was true to the end. In these last months, with Ed turning 70 and his wife joining him there, Stewart Hurd said since they couldn’t do things they would typically do because of the pandemic, she asked him to set up his equipment and play music in their driveway.
“Turned out people really liked that. and they asked him to do it again. And he did, even just a few weeks ago,” said Hurd. “He’d play two to three hours and even though everyone was apart, Ed’s music bound them together in that Maple Lake community. Ed loved living there. Heck, he was the Governor of Maple Lake and everyone knew him. What was even better, I never have known a person that could remember everyone’s names.
“The best thing I can see is he left them smiling,” Hurd continued. “He just brought a smile to people’s face.”
A smile. It is such a simple thing the world could use more of. We just lost someone who created an endless supply.
His own smile and the ability to make others smile is a beautiful legacy and perhaps his biggest. And when considering the life of Ed Morrison, that is no small feat.
Rest in Peace my friend. Your work here is done.
Editor's Note: Various photos are shown with Ed Morrison, including those with his wife Carol Morrison and other family members, as well as at events such as weddings and class reunions. He's also shown with his friend Stewart Hurd and, at the top, with his wife doing some tunes in the driveway. All photos courtesy of Stewart Hurd and Facebook posts.

I'd have to agree Jeff. Ed could always bring out a smile or a funny line, Even if the line wasn't his he would always join in with his big laugh. I considered him a good friend. I first met Ed in the early eighties. We worked together as advertising salesmen along with Mark Mills at WPDX radio, "The Big X" I seem to remember was one of their tag lines. I was the new guy on the team and Ed or "Bob" was always there to help. I thought of him as a historian as much as anything I guess. Local born and bred, there was very little he didn't know about our local scuttlebutt. Very little he didn't know about the beginnings of local radio, the players and the doers and ohh the stories he could tell!! I always enjoyed listing to Ed telling stories about the early days of radio and the surrounding area for that matter. As I said, he knew all the characters and the roles they played that made up the fabric of our community, and I'm talking at the very least county wide. People like Ed are are always hard to lose and are missed very much. All the little incidentals the could impart that kept things interesting. The stuff that only a few would know. The folks that when you think of something and don't have a clue are the go to encyclopedia on events of the past. I'm sure his dear Carol and his family will miss him most but we should all take stock in having known one of the "good guys", and yes Jeff, a guy that even on a not so good day, a guy that could help bring out a smile :)