By Jeff Toquinto on April 17, 2021 from ToquiNotes

It was Dec. 18, and it was supposed to be a good day for Sami Wilson. The 2019 Bridgeport High School alumna was heading home from what she thought was her last dialysis treatment before getting the ultimate Christmas gift from her Aunt Debbie Huffman.
In just a few days, she was supposed to receive her aunt’s kidney during a kidney transplant procedure at UPMC Children’s Hospital in 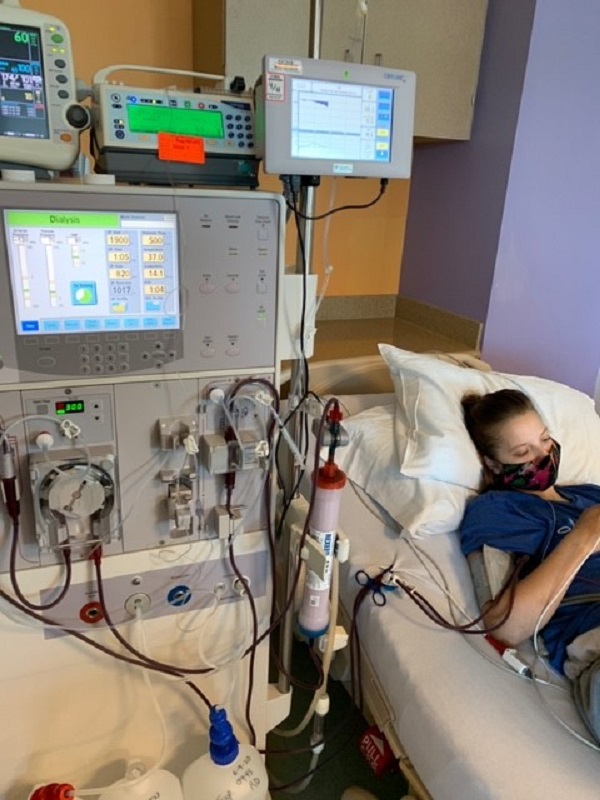 Pittsburgh. The uncertainty that had entered her life a few months early when the diagnosis of end-stage kidney failure was the reason for her pain was about to be put rest.
“I still remember coming home that day and being excited because I just finished dialysis, my last dialysis, and it is not fun because it’s hard on your body,” said Sami. “I was so ready to be over that, get on to my recovery and everything life was going to offer. The start of that new life was just a few days away.”
As it turned out, life had other plans.
She walked in the door of her Bridgeport home after dialysis to find her father Mike, her mother Kim, and sister Danielle sitting and looking directly at her. She knew something was not right.
“I kind of figured something was up because they were all sitting on the couch. I could tell they were sitting there waiting for me to get home,” said Wilson. “They were waiting to tell me the news.”
The news was her Aunt Debbie was no longer a match to donate a kidney. A desperately needed blood transfusion months earlier had changed the chemistry in Sami’s body and the once family match was broken.
Emotionally, Sami Wilson was about to be broken as well.
“I thought at first they were just joking with me, so I didn’t believe it. I asked if they were serious and actually laughed thinking they were joking. They said, ‘no, the surgery is not going to happen.’ I could tell by their faces they were serious,” the 20-year-old said. “Then it went 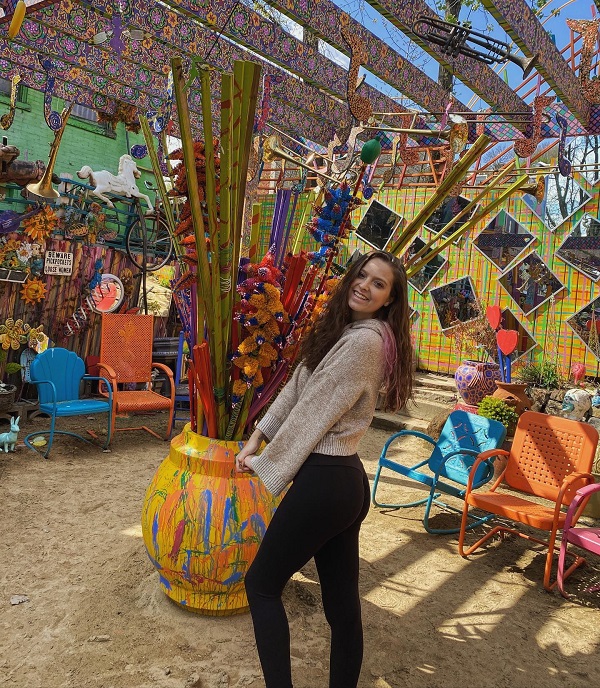 from thinking it was a joke to shock. I just kind of walked away and just went into the bathroom and got mad and upset. I was in a bad place because I was so close.”
It was part of a multi-month’s long process of a roller coaster ride that had Sami Wilson at both ends of an emotional spectrum. And when she was at those ends, the ends were extreme.
“I know exactly what that phrase means,” said Sami with a laugh when asked about being at both ends of the spectrum. “Everything was extreme and there were so many ups and downs, but we’ve made it.”
The ups and downs included the last-minute scratch of getting her aunt’s kidney, the constant waiting game knowing time was of the essence, and even coming down with COVID. Even COVID had a two-sided spectrum to it.
“You’re down with COVID and you’re worried, but I didn’t have it too bad; more like a sinus cold,” said Wilson, who said her COVID diagnosis came after she learned of her second opportunity for a new kidney. “The good news was it wasn’t too close to the date of the surgery. The better news was I got it before surgery instead of after where I would have been extremely immunocompromised.”
The COVID and other stuff happened between the cancelation of a kidney transplant and news from Aunt Debbie roughly a month later that there was another kidney ready for her.
“My aunt actually told me because she knew more about what was going on than we did because she was the living donor. She didn’t give me her kidney, but she gave her kidney to someone else that led to me getting my new kidney,” said Sami. “My aunt is and always will be my hero.”
It would be in the middle of March when the actual surgery would take place. Despite it being scheduled and despite all systems being a go, Sami Wilson stayed calm.
“I was cautious. I didn’t want to get my hopes up. I just kept telling myself the date of surgery is just a date and it either will or it won’t 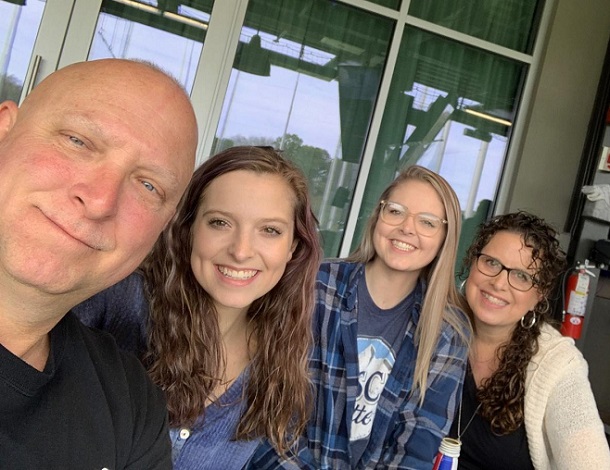 happen,” she said.  “I had been turned away before getting close, so I decided I wouldn’t get excited until the day of the surgery and when the call came.”
Staying at the hospital, Sami Wilson could barely sleep. A few hours later, it would not matter. She got the call. The surgery was on. Her life was set to go off of the hold button to a position where full throttle will eventually be the norm.
“When the call came, it set in,” said Wilson. “I finally let myself get excited.”
Surgery went well. Wilson does not remember the surgery but remembers waking up groggy with a nurse and a few others around here in the intensive care unit. They wanted to know if she wanted to see her mom and dad. She did.
“I was so out of it, but when I saw them, I just started crying. I couldn’t believe it had finally happened,” she said. “… I guess I was really emotional from being on so many drugs and being able even in that condition to realize what took place.”
That was March 16. The road would prove bumpy for a few weeks afterwards.
Bumpy, in this case, meant extreme pain. While pain is not unusual in transplant patients, the medical professionals knew the pain in this case was extreme and procedures, including surgery, was required to make sure the new kidney was functioning fine and to find a way to stop the pain.
“I was upset at the level of pain I was in. There was nothing that was making me get better from it. Nothing helped,” said Sami.
The best news was a kidney biopsy showed the kidney was in solid working order. Some more good news was that a surgery that blocked a nerve and also involved cutting a muscle to relieve tension worked immediately.
“It made my entire abdomen and back numb. I was so surprised and happy to be out of the pain,” said Sami. “I was able to rest and relax 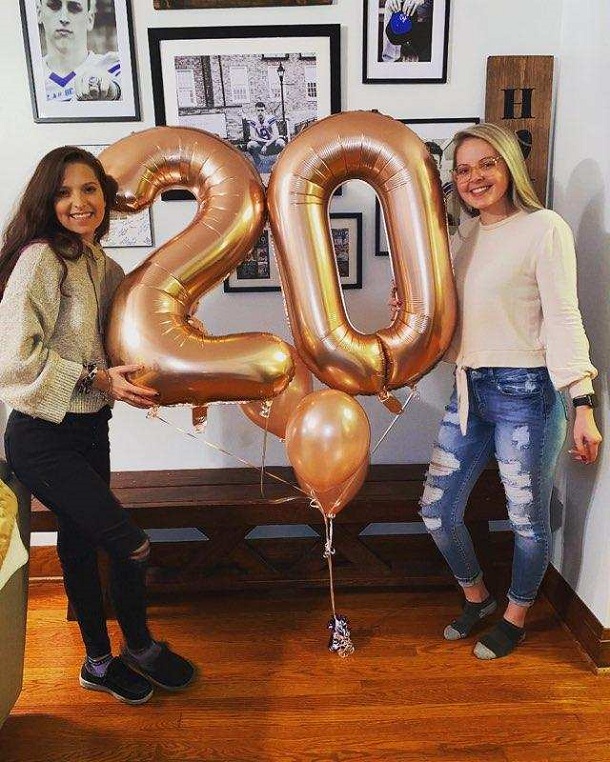 and start healing.”
That is what she is doing now. Still sore, but steadily healing.
“I’m to the point I just want to see my friends and do things with them. I couldn’t with dialysis because I was so tired and drained from it,” she said. “I’m ready to get out and do something like go hiking and I’m ready to get a job so I can work and make my own money. Plus, I want to get back to school. I just want to get on with what I should be doing right now with my life.”
There are a few things most do not do as part of getting on with their life at Sami Wilson’s age. And that involves wanting to meet the individual who donated the kidney to her.
“They’re separate from the children’s hospital, but I can send them a letter and see if they would like to meet me. I would love that and love to know why they made the decision; whether they had someone sick in their family like my Aunt Debbie that led her to donate or whether they did it randomly,” said Sami. “The most important thing is I want to thank them for saving my life.”
In the interim, she wanted to thank the community for their comments on social media, the cards, the letters, the texts, and the prayers.
“It gave me comfort knowing people were praying for me and supporting me,” said Sami. “I learned a lot about the good in people.”
Now, Sami Wilson wants to see even more of that good. With April being National Donate Life Month, she has a message.
“I don’t think people realize how many people need an organ and how doing something as simple as agreeing to be a donor on your driver’s license could impact so many people and their families or how being a living donor can do the same,” said Wilson. “It changes lives. It saves lives. You can be a prayer answered for a bunch of people. I can tell you it’s amazing.”
Sami Wilson can tell you first-hand. After all, Sami is proof that it is indeed amazing. She is living proof.
Editor's Note: Top photo shows Sami Wilson during some of the most dire times during her ordeal toward getting a kidney transplant. Second photo shows her post transplant having some fun outdoors. In the third photo, she is shown with her family in a Wilson selfie portrait. Bottom photo shows Sami with her sister Danielle on Sami's 20th birthday. All photos courtesy of the Wilson family.