By Jeff Toquinto on September 11, 2021 from ToquiNotes

The parcel sits just minutes away from Bridgeport. Since the start of the pandemic in early 2020, the parcel has almost been absent of activity.
Recently, that changed. And there are nearly 3 million reasons to know change is going to continue that is good for Clarksburg, Bridgeport, 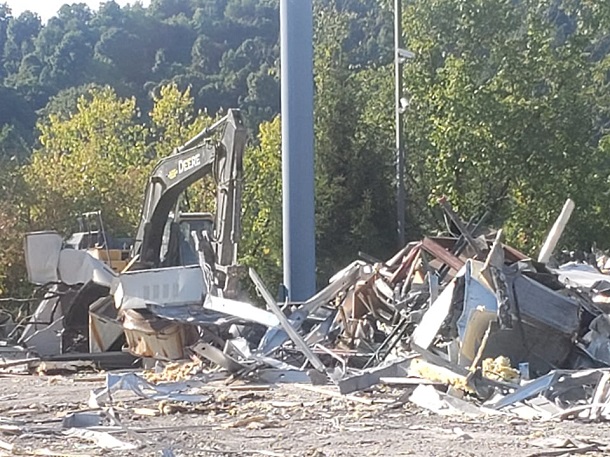 and the entire region.
For anyone that has driven the stretch of Emily Drive meandering through the NewPointe development, they may have seen the pile of twisted steel and beams laying on the property that formerly housed Ryan’s Restaurant. There is a good reason for that.
As we reported back on June 11, the former Ryan’s property will be the future home to Olive Garden. And according to Clarksburg Director of Economic Development John Whitmore, AICP, the demolition is the first step that will be followed by site preparation and then construction of an Olive Garden by Derek Inc. out of Cincinnati.
The project cost after the building permit application was filed June 7 – $2.9 million. As for the timeline to see it open, it is not etched in stone.
“The timeline is determined by the speed of the business permit applicant but working with these types of projects in the past the construction is usually boiler plate. It could be in the spring of 2022 or even sooner,” said Whitmore. “One thing to consider is that there are material shortages all over the board, not just wood, which means any timeline could change.”
The certainty of a timeline is a minor issue with the certainty that a new multi-million investment is going into the region. However, rumors of another restaurant going right up the road in the lot that houses the now defunct Pier 1 building is just that – a rumor.
As is often the case, social media posts on the demolition have ignited rumors that a Red Lobster will be joining Olive Garden. For many years if you saw one restaurant chances were good you would see the other. That is no longer the case.
Darden Restaurants used to own both chains, but no longer owns Red Lobster. It was initially sold to Golden Gate Capital and in 2020 it was sold again. The second time it was sold, the group purchasing Red Lobster was Thai Union, PCL. 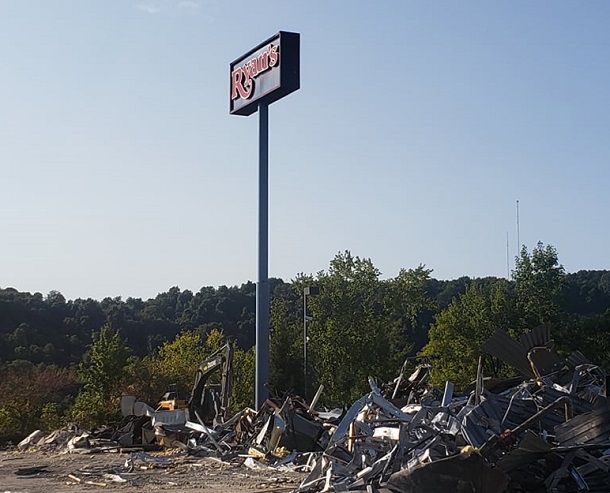 That does not mean a Red Lobster would not locate there or in the area. Rather, it means it will not locate as part of a pair. Further, Whitmore said Red Lobster, nor its current owner has submitted plans for the city to review or even “solicited information to enable a building plans review.”
Still, for those of you who would dismiss the arrival of Olive Garden as “dumb” or wrong for the area because “we have too many good local Italian restaurants” or even worse, “they should have gotten someone else,” you could not be more off base.
First, any company looking to invest $3 million in your community and region is a good thing. The one-time B&O will provide much to the City of Clarksburg. Second, no one is arguing over the good local Italian restaurants. If this region can tout anything, it is the number of high-quality Italian restaurants it has per capita. I’d put that up against just about any other area.
However, those going to the local establishments will still be going. Those staying in the area for tournaments, perhaps going to a concert, or visiting families will continue to seek out those establishments. This is not about them because, and I do not believe this is an insult, Harrison County is not a tourist destination.
The Olive Garden will draw plenty of locals, but it will be getting a ton of traffic off the interstate of individuals traveling to point A and B and NewPointe is a quick and easy stopping place.
As for the developer “getting someone else,” again, completely wrong. A developer is getting who is willing to pay them money to come aboard. They are not going to turn down anyone – even another Mexican restaurant – if they want to come to the area.
For those thinking it is a piece of cake to land a Five Guys, a Sonic, or anything else they want, the folks at THF Realty (who oversee Eastpointe and NewPointe), as well as the developers at Charles Pointe and White Oaks will be happy to sell you a lot and allow you to make it happen.
That rant over, this is good to see a decades-old development getting a multi-million-dollar infusion. Let me reiterate, it is good for Clarksburg, Bridgeport, and the entire region.
I’ve heard it a hundred times from the mouths of former Bridgeport Community Development Director Randy Spellman as well as current Director Andrea Kerr. What is good for one community is good for the entire area. Whitmore did not need to be goaded to go exactly there.
“Any type of commercial development is a plus because people going there will use some of the ancillary businesses. On top of that, it invigorates the cluster of restaurants throughout the region and specifically on Emily Drive because any new customer stopping there will see other businesses and services,” said Whitmore.
Most important, and Whitmore pointed this out as well, is money that may go to other counties or states is going to go here.
“It’s great having that money stay in the local economy and why the development there is important,” he said. “At the same time, we’re still encouraging our own downtown development and want to see development county wide. The fluidity of development usually spills over into multiple industry sectors.”
Yes, this is good news and $3 million worth of good news. The better news is that it could lead to even more – including, if Olive Garden is not your thing, the restaurant you would like to see.
Editor's Note: Photos show the former Ryan's site after recent demolition of the former restaurant's building.