ToquiNotes: Tom Steele Talks His Battle with, His Win Over and Message to Those Struggling with Alcohol

By Jeff Toquinto on October 31, 2020 from ToquiNotes

Tom Steele has practiced law for decades. He is currently working for Steele McMunn PLLC and has been going at it for 32 years.
Many people know him for his work. Others know him as the spouse of Jill Steele, the principal at Simpson Elementary School.
Many others know him a Bridgeport High School classmate, a student at West Virginia University, or for just being a genuinely all-around 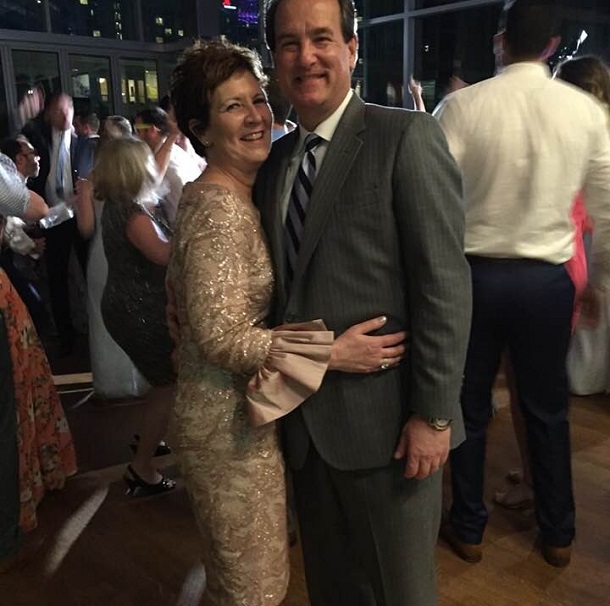 good guy.
Life, it seems, is good for Tom Steele. He will tell you that life is good.
If you ask him, he will tell you something else. Life was not always good. Tom Steele, a pretty strong and respected pillar in the Bridgeport and area community as well as the legal community, had a battle with alcohol that lasted more than a decade
“I’ve been sober for 23 years,” said Steele, a 1981 BHS graduate who has lived pretty much his entire life here in the city.
The problem started innocently enough. Although he did not consider himself a partier, he did drink in high school. With the drinking age at 18 at the time and with him a “November baby,” it was not an issue legally.
When he went to West Virginia University as an undergraduate student and graduated in 1985, he was still drinking as a student and a fraternity member. At that point, the serious problem drinking had not arrived. The foundation for it, however, was already in place – and his next stop saw the problem take root.
“I went to law school at WVU and graduated from there in 1988. Law school is a big drinking environment and that’s when it started to become a problem,” said Steele. “I look back and realize when I graduated from law school I was approaching 10 years of drinking, but it was after that where my drinking really began to grow and continued into an age where it should diminish.
“It was a problem because it was affecting personal life,” he continued. “I made many selfish and ego-driven decisions.”
Tom Steele, lawyer, was working hard. He was also drinking hard. Steele estimated he would have 40 to 50 drinks a week, mainly liquor, and that the drinking would occur continuously.
“I might drink at lunch, go home and drink, drink on the weekends. I tried to find a day when I didn’t drink and it was something I couldn’t 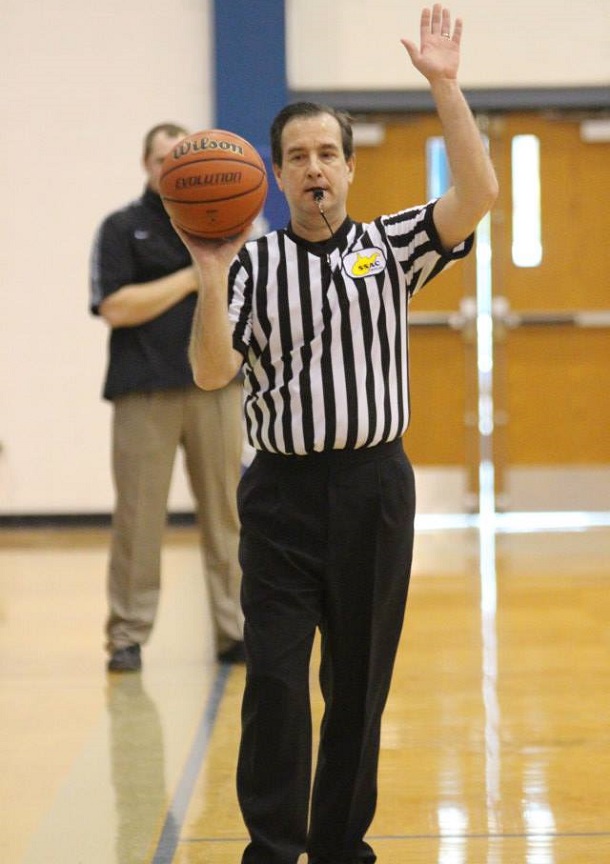 find,” he said. I don’t blame anyone for the circumstance I created or the situation I was in, but it certainly impacted by family and my personal life in ways I regret.”
Tom Steele, who will turn 58 this coming week, had been drinking from his teens into his early 30s. Eventually, he knew it was time to stop – and he got some help.
“I got some tough love from people I needed to get tough love from and sought some help,” he said.
The treatment included Chestnut Ridge. It included 18 months of Alcoholics Anonymous where he went five times a week. It included some own personal infliction.
“At some point, I just realized I was getting tired of myself,” he said. “The big thing was admitting I needed help. You have to, whatever the struggle it is your facing, be brutally honest with yourself. That’s a hard step to take, but it is definitely a big one.”
The help worked. In 1997, Tom Steele was putting down the bottle. The problem, still, remained.
“I was trying to avoid alcohol and was miserable. I had to get rid of the desire and needed to find a way to do that over and above what was at least able to help me stop,” said Steele.
He found the answer, he said, in Jesus Christ.
“Seeking Christ was what worked for me and my problem and I can tell you from experience it has helped so many others,” said Steele. “It didn’t happen immediately, but it evolved over the years to where it’s become more intense and focused in the right direction.
“Finding Christ was everything. I was a new creation … When you have that relationship, you can realize it’s the ultimate way to live out a lifestyle because God took away the panic,” he continued. “The questions of how to go to a WVU football game without drinking were answered. The question, even though I’m not a NASCAR fan, I questioned what NASCAR would be like without alcohol because that was how I was thinking. God took care of those thoughts.” 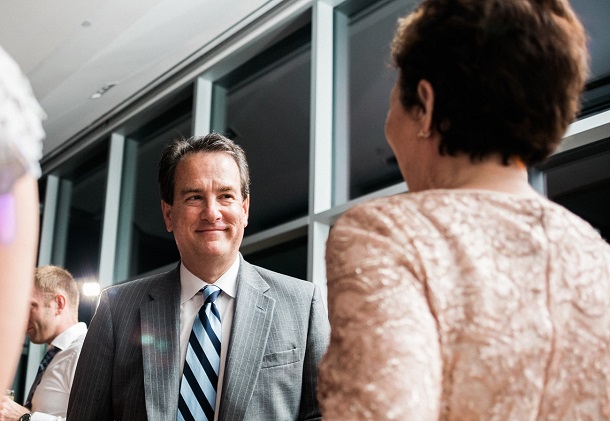 Steele said another thing he had an issue with, and it is one he believes is a problem for others, is the marketing of alcohol. He said it helps leads to what he believes is an addiction problem.
“It’s a primary and gateway drug. I say that because I don’t know anyone that went from green beans to heroin,” said Steele. “The real problem with alcohol is that it’s glamorized, it’s legal and it’s marketed as a sign of success.”
Steele’s own journey would prove the marketing theory wrong. By just about anyone’s standard, Tom Steele is a success. He said he is where he is today because he did what he hopes others struggling will do – ask for help and do not be ashamed to do so. 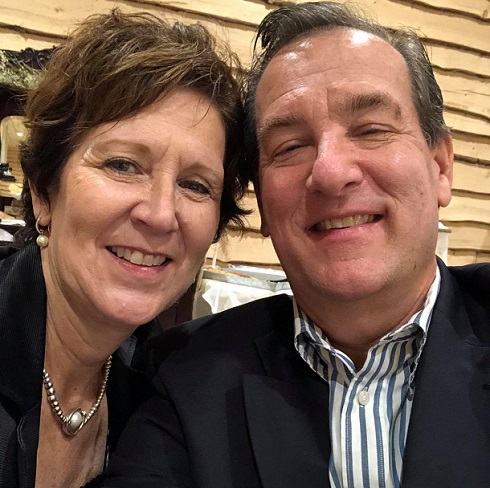 “It’s important to realize you have a problem and talk to somebody honestly, even if it is someone else with an alcoholic problem,” he said. “Tell a family member, tell a friend; any way to discuss it and get on the path to being sober.
“I realized after I was brutally honest with my problem that I had another problem other experience, which is shame. Not just shame from having a problem,” he continued. “There is shame because I felt if I stopped drinking I would be ‘less than’ because it was a sign of success. I got through that, but to say I’m coasting 23 years later is not entirely the case.”
His long-term solution was seeking Christ. The short-term solution has to be to decide to stop drinking, get through your day and put your head on the pillow at night and start looking for help.
“There are so many programs that will help you, so many friends and family that will help because, trust me, if you go to them with a problem they already know you have one and are ready to help,” said Steele.
Steele is now at a point where he does not even know what a mixed drink costs or a what you pay for a beer. At the same time, he is comfortable being around others who may have a drink.
“If I’m hanging around you and you have a beer, I want you to have it. If you want to have six or more beers, no offense, I’m probably not the guy to be hanging around,” said Steele. “I tell Jill there are five or six times a year I have a craving; maybe on a hot day during cook out our seeing a cooler on a friend’s boat will 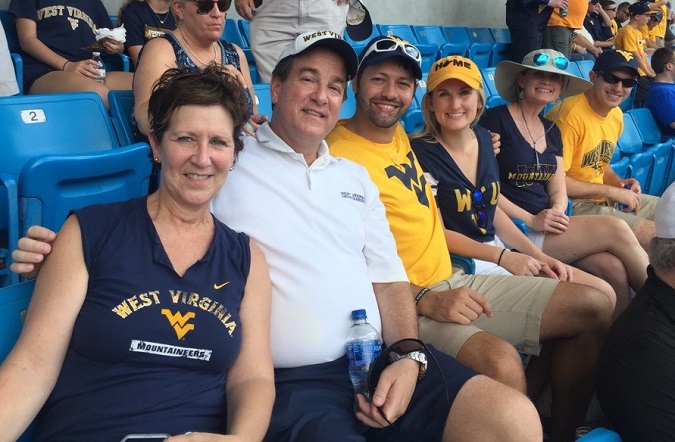 trigger it so I’m not on cruise control.
“God has removed the desire and it’s not longer a problem, but it takes time,” he continued. “God is now my lifestyle, and I realize life is better without the bottle.”
Life has been shared the last 15 years with his wife Jill – all of them sober and 13 of them married. She, too, has helped him stay on the path of sobriety.
“I was seven or eight years sober when we met, which was God’s timing because she’s helped me grow in my relationship with Christ,” said Steele. “I’m not boasting because it’s not a struggle, but I want people to know you can have a new and better life. You’re not alone, and people are willing to help. All you have to is ask.”
Editor's Note: Top and third and fourth photos shows Tom Steele with his wife Jill, while he's shown in the second photo in his past moonlighting gig - basketball official. In the bottom photo after Jill and Tom are, from left, Aaron Kauffman (son in law), Courtney Kauffman and Caitlin Adams (twin daughters), and Kyle Adams (son in law). Photos courtesy of Tom Steele.