It is official. The 37th Annual Frank Loria Awards Banquet hosted by the Columbian Club has been canceled.
After holding out hope that the banquet could take place with an “in-person” setting, Loria Banquet Chairman Mike Romano said they had no option, but to cancel it. The decision was just recently made as Romano, two weeks ago, said options were still being explored. 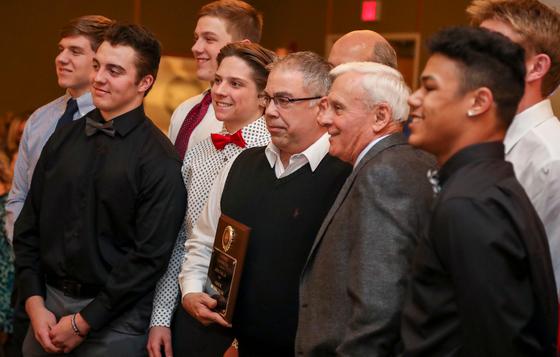 “The Columbian Club and the Harrison County School System are disappointed with the cancellation of this year’s Awards Banquet, but the increasing number of virus infections in both West Virginia and around the country leaves us no choice,” said Romano. “We are the most disappointed for our student-athletes who worked so hard to earn the honor of being recognized in front of their families and the entire state.”
The Columbian Club has turned the event into a showcase to honor the memory of the late Loria – who was killed in the tragic plane crash of the Marshall University football team as an assistant coach – who was a consensus All-American at Virginia Tech and a graduate of Notre Dame High School. The event in recent years has packed the Bridgeport Conference Center to honor members of the all-Harrison County football first team.
Romano said the event will eventually take place at a yet-to-be-determined date in a virtual format. He also said students will still receive all trophies, plaques, individual football portraits and a highlight reel courtesy of WDTV that will also feature a short speed by West Virginia 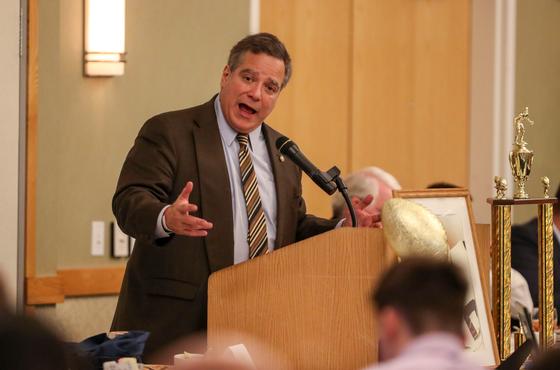 University Coach Neal Brown and former Harrison County Superintendent of Schools Dr. Mark Manchin
“We want them to receive what they would typically receive,” said Romano.
The event has featured several big keynote speakers. Landing Brown was certainly a feather in the cap, and not being able to have the kids hear from him directly due to the COVID-19 situation is disappointing said Romano. However, the coach did provide a comment for those who will still be honored
“I want to congratulate each of these young men on the hard-earned honor of being named to the All-Harrison County Football First Team,” said Brown. “I wanted to be there to shake the hand of each student-athlete and congratulate them on their achievements, but we are in difficult times. I hope that all of them will to continue to strive for greatness both on and off the field.”
Romano thanked the Harrison County School System for continuing to be a strong partner in the endeavor. He said they have worked with the Columbian Club to help get things rolling on the virtual presentation that will soon take place.
“We think it’s the least we can do to try and make it like the full event as much as possible,” said Romano of the virtual presentation. “The technology that allows this is the best and safest alternative available.”
Editor's Note: Top photo shows Coach John Cole receiving the 2018 Coach of the Year Award surrounded by his players, while Loria Banquet Chairman Mike Romano is shown below. Photos by Ben Queen Photography.