STRONG IDEA: In it for the Long Haul

By Emily Stapleton on November 13, 2013 from Strong Ideas

Two days ago I completed the Huntington Marathon.  Eleven years ago I completed my first marathon in Pittsburgh.  A marathon is a long haul…26.2 miles of putting one foot in front of the other.  In between those two events, I’ve become a mother (three times), completed four other marathons, and basically just lived life.  If you’re a parent or a runner (or both, like me), you can appreciate that much has changed from May of 2002 to November of 2013…but much has remained the same. 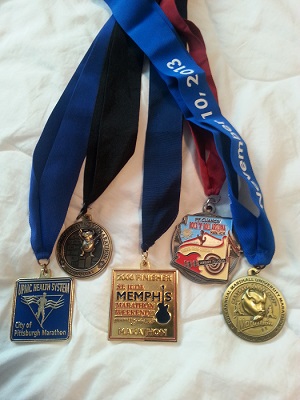 May 2002 - Pittsburgh Marathon
May 2003 - Flying Pig Marathon
September 2004 - Baby 1 born
January 2006 - P.F. Chang's Rock and Roll Marathon
December 2006 - St. Jude's Marathon
June 2008 - Baby 2 born
October 2009 - Baby 3 born
November 2013 - Marshall University Marathon
The sport of distance running has changed immensely over the last decade.  As I ran in Huntington on Sunday, many runners exchanged information about their GPS data and I heard many apps giving verbal feedback about pace and distance. Most of that technology simply wasn’t available when I ran in Pittsburgh 11 years ago.  Theories of training have changed over the past decade.  Shoe manufacturers have changed the way our most basic piece of equipment is constructed.  The half marathon has boomed in popularity (I hadn’t heard of a half marathon in 2002) and information on training and events has become more accessible through the Internet.  We no longer have to wait for the latest issue of Runners’ World Magazine to come in the mail…though I still read mine cover to cover.
While running on Sunday, I observed many of these changes and pondered our ever-changing world.  But this blog post is not really about the changes to the sport of running.  It’s not about how much faster or slower I can complete a marathon a decade later.  It’s not even really about marathoning or even running.  This post is about life and the phases we go through; about the phases of my own life.  It’s about the changes and the consistencies of life and how we choose to embrace them.  The marathon is just the metaphor.
Here’s a quick comparison of my marathon preparation for my first two marathons (pre-children) and my most recent marathon (mother of 3).
As I ran on Sunday, I thought not only about our changing world, but also about the fact that some things never change.  Many aspects of the sport of distance running have remained consistent over the last decade.  The running community remains a strong, inclusive group.  The field continues to host multiple generations…I chatted with a 17 year old and a 65 year old on Sunday and the oldest woman to complete the New York City Marathon recently passed away at the age of 86.  And, no matter how complicated our technology and our shoes get, running is still just putting one foot in front of the other.  And that simplicity will never change.
My life, while in a completely different phase now than in 2002, also hosts several consistencies.  Through it all, I have continued to run.  I have continued to support and receive support from my husband.  And through the long haul, I have continued to wake up everyday and choose how to live my life, how to set priorities.  And that simplicity will never change.
Now the question is; where will I be in 2023? 2033? 2043?  What will change?  What will remain consistent?  Where will you be?
Until Next Week,
Emily Stapleton