ToquiNotes: Amidst Pomp and Circumstance, BHS's Superman Makes His Last Showing at Graduation

By just about any measure, last Saturday was a bag of mixed emotions. Thanks to COVID-19, the emotions were probably boiling over for many.
Barring coming off a sabbatical, everyone is aware that high school graduations in Harrison County took place last week, about a month later than usual due to the Coronavirus. Bridgeport High School’s graduation took place a week from today as Mother Nature kept the temperatures cool and the rain away. 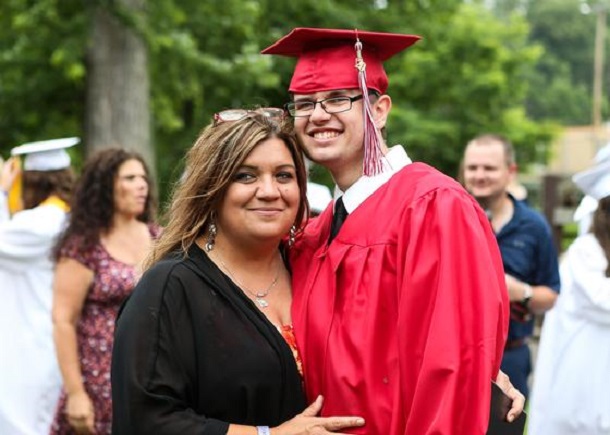 It was, at the very least, a fair tradeoff for the students in the Class of 2020.
For anyone who has looked at the story coverage, video, and photo galleries from the event on Connect-Bridgeport, they have gotten a glimpse of the experience. There was one other thing that took place that was a huge loss to Bridgeport High School in a sense that I personally want to make sure everyone is aware of.
The school lost an important person who used up all their school eligibility. Bridgeport High School lost its Superman to graduation.
Last Saturday, and I have no problem saying this, my favorite student who has ever entered the Bridgeport School system walked across 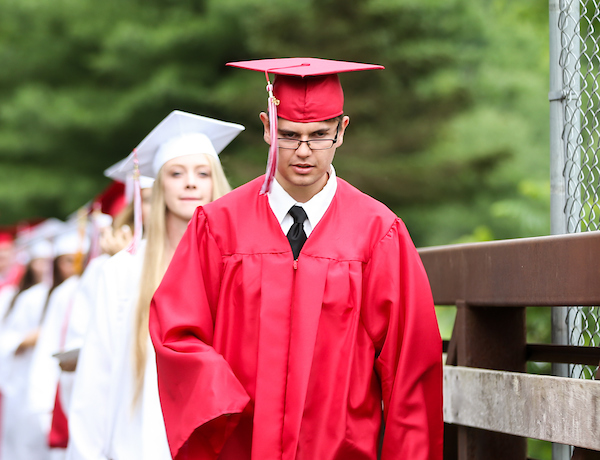 the stage, was handed his diploma from a smiling Matt DeMotto and given a little pat on his arm from the BHS principal.
A short while later when the final words were spoken, Superman’s time was over. Elijah Bailey, known to his friends as Eli, had graduated.
Just getting to the point of graduation was not supposed to happen. After all, the medical professionals – and I do not mean this as a bash – pretty much said before he ever uttered his first words this would not happen.
Their rationale was rooted in what they saw. What they did not see was that big red Superman cape Eli had on.
While most know of Eli’s past, here is a refresher as to why doctors were not sure Eli Bailey would be a high school graduate, let alone walking across the stage under his own power to receive his diploma.
Eli faces some disabilities because of three brain surgeries as a child that finally resulted in the complete removal of the left portion of his brain. 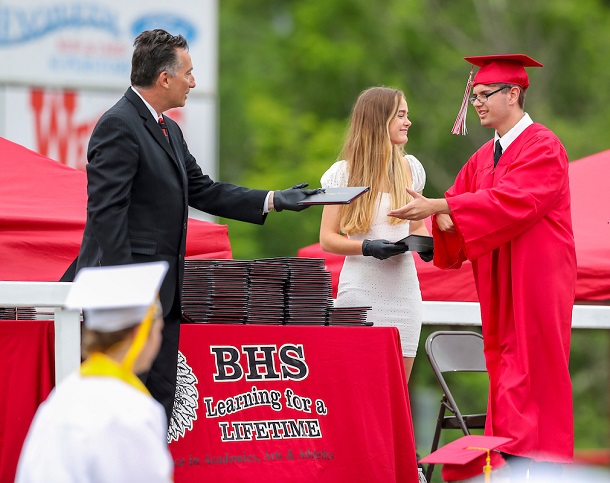 Even before he was born, Eli was seizing while in utero and after he was delivered. In fact, he was seizing every three hours after he was delivered. The problems led to a decision three months after birth that the entire left side of Eli’s brain would need to be disconnected.
The surgery to do that – and the accompanying medicine along with it – did not work. The seizures continued, and they continued for the next three years before the surgery was done to remove the left side of his brain. It would be an eight-hour procedure that resulted in Eli’s mother Beth Fox being told the seizures would never happen again, but that any level of normalcy in his life was far from a guarantee.
In a sense, the doctors were technically right about parts of the normalcy. Eli Bailey has made more people smile, inspired more people, 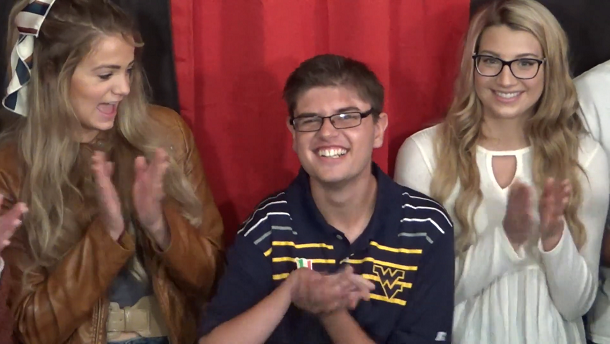 became friends with people he knows and will never see again than anyone in the history of Bridgeport High School. Go ahead and mark that down. It is not speculation. It is truth – and his level of influence is simply not normal.
Back in September, I wrote about Eli’s popularity and impact and asked Matt DeMotto about the young man he has been around for the past four years. DeMotto summed up what Eli brought to the school each day in a statement better than anything I could write here.
“I’ve never seen Eli look at me without talking to me and smiling. Here’s a kid happy every single day,” said DeMotto. “It would be nice if we all have a little more Eli in us. I can tell you for sure the kids in the school absolutely love him.”
They do. The staff does as well. Eli’s birthday was celebrated at the high school in a manner usually reserved for dictators who demand the celebration. Eli’s was one where folks not only joined in on the fun, but it became part of the school’s morning video tribute. 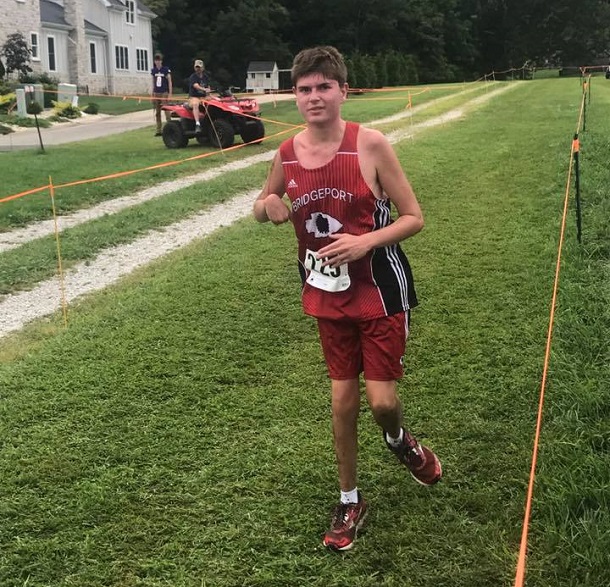 How did all of this happen? Part of it is truly Eli’s “Superman” status. I am betting a lot of it has to do with his upbringing. I do not know all the components in Eli Bailey’s family. One person I do know is mom.
Beth Dawkins Fox is Eli’s mother. She is also the Bridgeport City Engineer. I know “mom” ranks first when it comes to listing her titles.
I have watched her handle Eli since I first met him as a child in Challenger League baseball. I have watched her from afar at sporting events and school activities. I have heard her concern as he started (and then became the ongoing employee of the month) his job at the city’s pool. I’ve talked with her about how far he’s come and listened to her emotion when she talked of how supportive the students at his school have been in accepting him to the point that, yes, he is the most popular student and student-athlete of all time.
Mom deserves a whole lot of credit here too. She loved him unconditionally when the future did not have a forecast of sunny days and 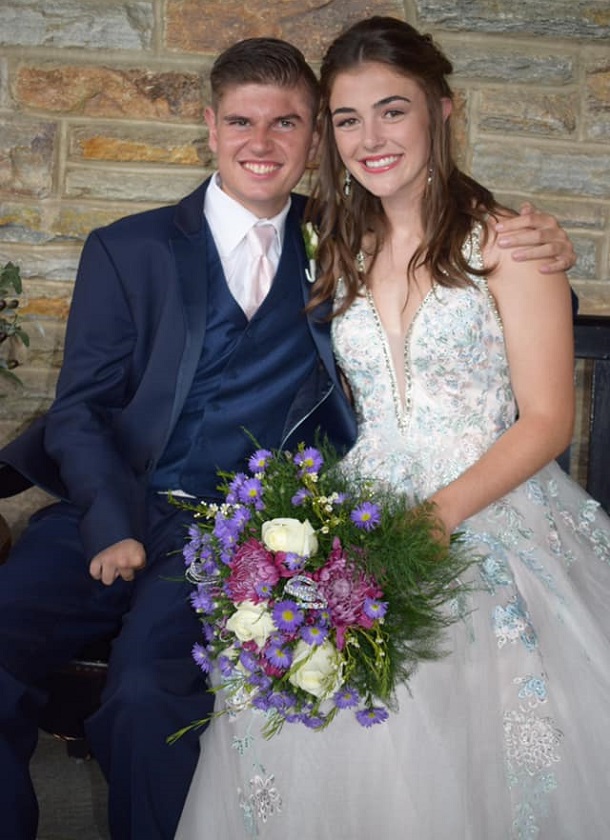 instead looked cloudy and ominous. Good moms do that. Great moms take what God gives them and molds it into something special.
I am sure there are others involved in the process on the family, friends, and medical front, but I have watched Beth do her magic. And it is special.

Eli Bailey is something special too because of it. Every single person that has encountered him to this point has had their own lives enriched. While I miss the little boy who would occasionally send a simple Facebook message that said “Hi,” I think I’m going to really enjoy watching this young man go off into the world and continue to make his portion of it better for all surrounding him.
As he goes forward, he is armed with a diploma. He is armed with a million-dollar smile. And Elijah Bailey has personality to spare.
When you look at it, he seems to have everything needed to transfer into the next phase of life. The only thing that worries me is where he is going to keep that phone booth. After all, if you are Superman, you always need a phone booth.
Best to you Elijah Bailey. On behalf of the entire community in Bridgeport and beyond, thanks for being our friend. Thanks for being our Superman.
Editor's Note: Graduation photos, including top photo with mother Beth, and cross country photo by Ben Queen Photography. Photo with kids clapping are during his birthday at BHS and is a screen clip from the Indian Insider video produced by Brad Bonenberger's class. Bottom photo shows Eli Bailey dapper for prom last year with Juliet Hart. Photo courtesy of Beth Fox.